Arts4Science4CulturalDiplomacy – is a composition of terms which describes a conceptual framework for activities in an interplay of the three fields of action: Art, Science, and Cultural Diplomacy, led by stakeholders from the civil society in cooperation with academia, political institutions.

the project has been developed with the aim

to contribute to the current regional (Austria, Europe) and the global endeavors toward the realization of the Sustainable Development Goals (UN SDG´s) through cross-sectoral and international cooperations.

Applying on the definition of Science Diplomacy from the former US Secretary of State Clinton’s Science Advisor Nina Fedoroff (Basha 2016; Copeland 2016),

Lorenzo Melchor, Izaskun Lacunza, and Ana Elorza. 2020. What Is Science Diplomacy?. In: S4D4C European Science Diplomacy Online Course, Module 2, Vienna: S4D4C). ), in recognition of Art as a tool for building international bridges by providing a common language, and in recognition of Cultural Diplomacy as a form of public communication through soft power, which influence cannot be done by the force, but through the skills of its actors which are ranging from trust-building through diversity-sensitive communication, intercultural and multilingual competence, emotional leadership, to comprehensive knowledge and sense for its transfer, ACD-team has started projects and initiatives which encompass and interwave the practices from Art, Science, and Cultural Diplomacy.

as a framework for ACD has been created by ACD-president Tatjana Christelbauer after completing the comprehensive online course on Science Diplomacy in July 2020, to interwave the Arts and Cultural Diplomacy into general debate, by spotlighting on the fruitful contribution of the actors from these fields by engaging in the general public, by advocating for science, public policy, and politics to communicate better; by advocating for art as a language for science to improve international relations; by facilitating communication channels and exchanging interfaces among researchers, politicians, and stakeholders from the civil society,

to promote and advance the Science Diplomacy for the realization of the Sustainable development Goals (UN SDG´s) and to advocate for the art and intercultural education as important pillars for the development of the barrier-free, inclusive education for all (SDG4,5); to promote and to provide experiential and creative learning methods and activities for teaching skills like mental agility, professionalism, cultural sensitivity, and empathy, that are essential to reach effective, science-informed responses to today’s global challenges; to support the regional, European and global integration through a framework which connects people and values across all borders.

Scientists and diplomats, as well as art-professionals, would benefit from joint education in cross-cutting issues, such as to gain a deeper understanding of the interaction between science, arts and international relations, technology and innovation, and its repercussions onto the economy and geopolitics.*

Projects within the ArtImpact2030-initiative such as DanceArts* social sciences, F*Air, inTalk Sessions with focus groups on UNESCO Futures of Education- Let´s Brick!-2050 in partnership with the UNESCO and international stakeholders from Academia and Civil Society;

ACD-president in long-term cooperation with the Institute for Cultural Diplomacy Berlin ICD has presented a wide range of lectures on Dance Arts, Social Sciences, and Cultural Diplomacy and workshops for participants of international conferences, currently developing new cooperations in the field and creating new performance lectures and art installations.

Our globally interconnected world is currently realizing the environmental and social consequences of the current energy system. Radical changes in the European and global energy systems are in need.

How can we build such a system?

The technologies are highly developing to ensure the transformation toward society powered by sustainable energy.

How can professionals from Art support Scientists and technological development and v.v. toward common progress?

Awareness raising on potential and real dangers and damages caused on people and planet by non-responsible use of energy and other resources, and alternative solutions can be provided through art forms in a universally understandable language and reach the general public and decision makers across all borders.

Such example can be seen in the artwork of Friendensreich Hundertwasser. In 1980 Hundertwasser donated his Anti-Atom poster "PLANT TREES - AVERT NUCLEAR PERIL” to Ralph Naders Critical Mass Energy Project in Washington D.C. In the same year Hundertwasser supported the Austrian initiative of opponents of nuclear power and the Austrian Anti-Atom-Referendum for the conversion of the Zwentendorf nuclear power plant into a caloric power plant and the tightening of the Atomic Energy Ban Act. The poster was used for various anti-nuclear campaigns in the following years, and the sales revenue was donated to the citizens' initiative.

Such awareness raising actions as by Hundertwasser have opened space for critical thinking and dialogue, with impact.

Another example from a Nobel-price awarded physician-scientist Mr. Abdul Salam who promoted peaceful nuclear energy use has been applied by the current scientific and political endevoursa towards sustainable Nuclear Energy use.

How can Art support the scientific and political endeavours toward sustainable energy use?

ACD-project activities toward awareness raising on Renewable energies, safety and environment protection should contribute to the current regional Austrian and global endevours through cross-sectoral cooperations among civilian society, academia and politics by connecting art professionals with students, researchers and experts in the field.

Development of cross-sectoral educational partnerships (SDG4+SDG17) and cooperation among professionals from art, sciences, and politics will result in a higher impact on decision-makers and awareness-raising within the general public on responsible energy use (SDG7), and subsequently, such activities will support the environment protection (SDG15) which results with better leaving conditions and better health and wellbeing (SDG3).

Renewable energy and energy efficiency will work in synergy to drive global energy decarbonization. When pursued together, they result in higher shares of renewable energy, a faster reduction in energy intensity, and lower energy system costs. This also brings environmental and social benefits, such as less air pollution.*

inTalk webinar on 6th October 2020 in cooperation with MIB Trieste School of Management with Prof.Pilotto Stefano on "Geopolitical aspects on International Management" has opened space for further discussions on the role of energy use in the current political discourses.

A new project led by ACD-intern Sahar Ahdyar, Student of the Political Science at the University of Vienna is a part of the inTalk Sessions on the UNESCO Futures of Education within the ArtImpact2030-initiative and its start is considered for the end of November 2020.

The focus is given on Nuclear Energy use in the current global discourses on sustainability.

Students and Professionals from Arts, Science, and Politics will have the unique opportunity to widen their knowledge and perspectives toward Sustainable Development with comprehensive insights. 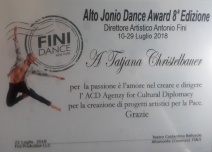